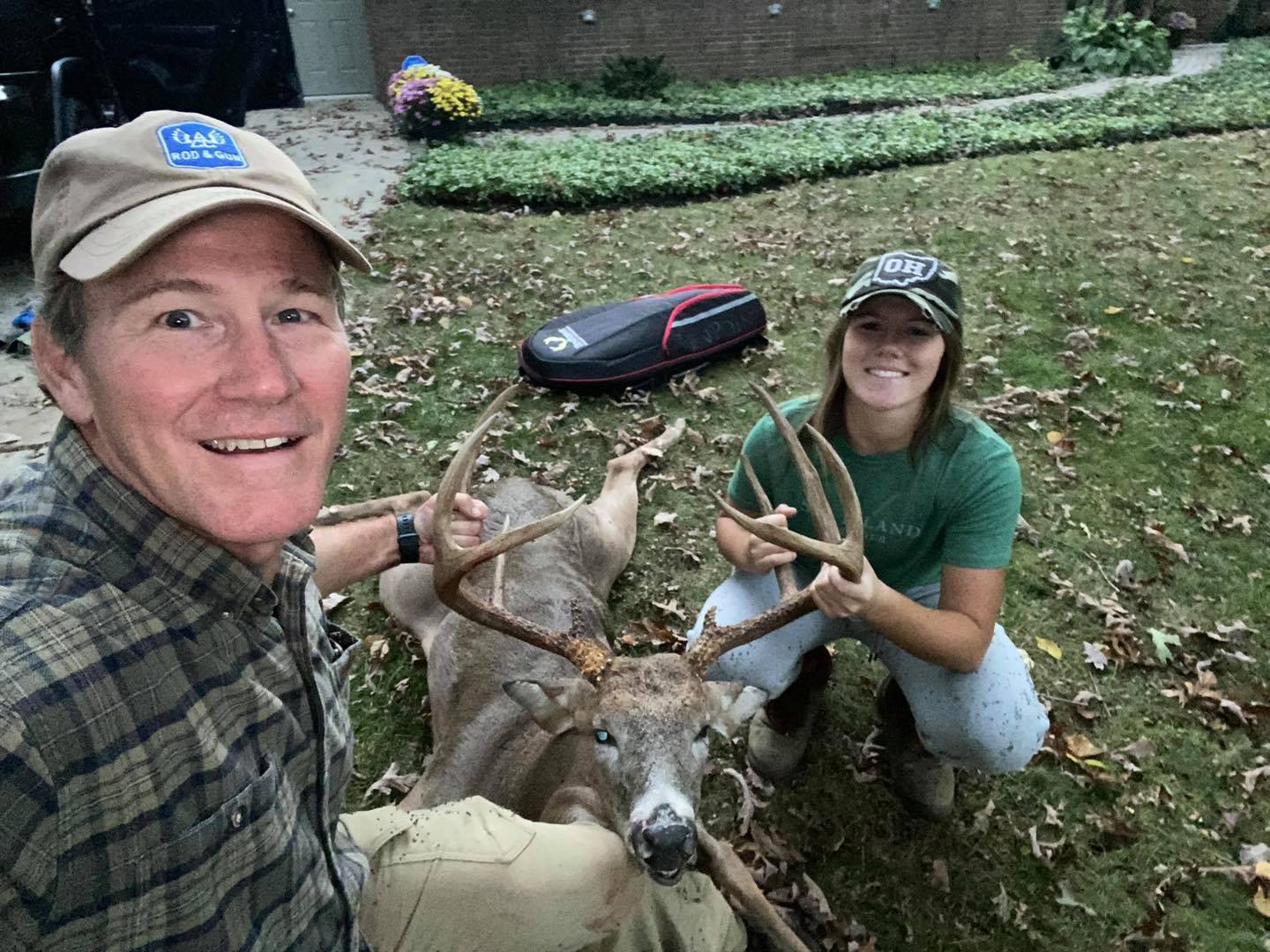 To Whom It May Concern:

Whoever you are and whatever you do, you’re not too busy to take a young person hunting. And if you think you’re too busy, it’s time to change your mind. Katie Husted, 14 years old and the daughter of Ohio Lt. Governor Jon Husted, has as busy a father as anyone, but he had the time to take her on the deer hunt of a lifetime.

Katie is a normal, inquisitive ninth grader. Very little escapes her interest. She loves sports, and plays on her ninth grade basketball team. She’s a good student, and she has lots of friends. She loves being busy, and she hates being bored. New things don’t intimidate her, so she wasn’t going to pass up an opportunity to go hunting, especially since she has heard about hunting from her dad all her life, and the family’s table fare often includes venison. They hunt, fish, and enjoy food they harvest for themselves.

Lt. Governor Husted is a lifelong hunter and outdoorsman, and the son of a hunter. He shot a great 8-point a few years ago that now hangs in their home. Little did he know that on Katie’s very first deer hunt she would top his biggest buck, and in a big way, with a giant mainframe 10-point, larger than anything he has ever seen in the wild. (A tape measure hasn’t been put to it yet, but it could push 170 inches.)

The fact that Katie’s father is a high-ranking political official doesn’t make this a silver spoon story. Jon Husted spent the first month of his life in a foster home before being adopted by Jim and Judy Husted of Montpelier, Ohio. “I grew up immersed in hunting and fishing. I learned to do it myself from my father, and wanted to pass the same values to my children. It adds so much to the experience, far beyond having someone else do the work so you can just shoot the deer,” says Jon. “I wanted to teach her to love hunting the way my dad taught me. That motivates me to find the time.”

The Oct. 17, 2021, hunt began the week before. Jon and Katie bought a two-person ladder stand at a local sporting goods store. They had permission to put it up on a Clark County property owned by a non-hunting friend who enjoys using trail cameras to see the deer on his land. This giant had made no appearances on the cameras. When he showed up it was a complete surprise.

While assembling the treestand and putting it up, Katie was all-in. Conversation tilted back and forth from school to hunting, family to hunting, conservation to hunting, hunting to hunting. With the stand finished, they put it up, fastened it securely to the tree, and clipped limbs to clear shooting lanes. Katie was gaining experience that would serve her well that next weekend.

On Oct. 17 they went to the stand around 3:00 p.m., a couple of hours before deer usually began to move. “As I climbed the treestand I was thinking this was going to be a fun day,” Katie remembers. “Then after we got settled in I looked at my phone and only 14 minutes had passed. I thought, ‘How long is this day going to be?’ I’m probably the world’s most impatient person.”

The temperature started out warm but it was dropping, so she buried her hands deep in her sweatshirt pockets, leaned against her dad’s shoulder, and dozed off intermittently. Every 15 minutes or so Jon lightly rattled some antlers, trying to catch the ears of a buck.

“Have you seen anything?” Katie asked.

“Just some squirrels and a hawk,” he replied.

“I’ve never seen a hog!” She said. “Why didn’t you wake me up?” Obviously, she wasn’t completely awake yet, but she soon would be.

About 15 minutes later Jon saw a buck coming. He took the crossbow off the hook, gently poked Katie and said, “Get ready, there’s a big buck!” He could have taken the shot himself, but that wasn’t a temptation. He was excited about her opportunity to get a buck bigger than any he ever got, and on her first hunt.

“Dad set the crossbow in front of me and I was trying to get my hands out of my sweatshirt. When I looked through the scope the deer was looking right at us.” The buck was nervous and stomped his foot twice.

Jon whispered, “He’s 35 yards and with the way he’s standing you don’t have much room for error, but if you have the shot, take it.” He saw her push the safety off.

She was dialed in and ready. Leading up to the hunt she had fired as many as 20 shots a day at a target. Her dad had shown her many photos of deer standing at various angles, taught her about anatomy, and asked where she would shoot the deer in each position. Thanks to these visualization exercises Katie was well prepared and could say, “I was as calm as I’ve ever been.”

Jon says, “Like her hero Katniss Everdeen, the female archer in ‘The Hunger Games’ movie trilogy, Katie is composed, disciplined and deliberate.”

When Katie shot, the deer bolted. “You hit it!” her dad whispered, but she wasn’t sure and started getting very shaky. Adrenaline was starting to take over. They carefully climbed down the ladder and went to the spot where the deer had been standing. Katie found blood and Jon encouraged her to lead the way in tracking.

The buck had run downhill. “After going about 80 yards my dad pointed, ‘There he is.’” He was a heavy one, and it took both of them to bring the buck back up.

“Are you sure?” replied Katie.

“Much bigger! You did a great job!”

They field dressed the deer together. She helped move the deer around and held the legs. They examined the body cavity to see where the arrow went through. She looked at the organs, held the deer’s heart, and noted where the arrow cut through it. “I had never done anything like that and it was all very interesting.”

The Lt. Governor has enjoyed plenty of political and sporting victories, plus a lifetime of great hunting and fishing memories. He was an all-American defensive back on the 1989 Division III National Championship football team, the University of Dayton Flyers. “Nothing tops this,” he says. “It’s great to have your daughter outdo you! And it was a great bonding experience.”

Family bonding is more important than ever, and it’s important not just to Katie’s dad, but also to Katie and her mother Tina Husted. “I think shooting is cool. My mother doesn’t hunt but she likes to shoot. Spending time with family is a fun experience. Hunting teaches patience (which I need), and I love having fun with my dad.”

Katie has a younger sister, Kylie, who hunted last year and passed up a 4-point. “It wasn’t big enough,” she said. The Husted girls have high standards, and Jon would soon be taking Kylie to the treestand. The girls also have an older brother, Alex, who loves fishing on Lake Erie with his dad.

Back at school, Katie got various reactions. “Some of my friends thought it was cool. Some thought it was disgusting. I don’t know if any of the boys were jealous, but if they were they didn’t show it.”

As it turns out, this story doesn’t concern just a few people. It concerns everyone. We’re all busy. We all have many obligations, especially as the fall hunting seasons arrive. The urgent things are always right in front of us, but if a Lt. Governor doesn’t let urgent things push the important things aside, that should be a lesson for all of us.