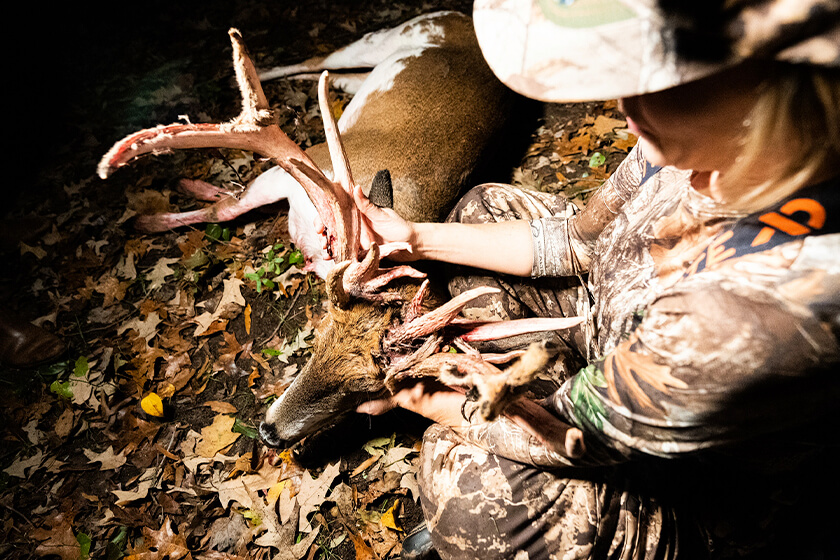 With a lot of self-discipline and patience, I waited years for a dream buck. For the last few years when my husband Lindy and I would sift through trail camera photos of the target bucks on our hunting property, I’d pass the baton back to him, his friends and my daughter. This was the property where my husband shot his first buck, my daughter shot her first buck and where I’d eventually shoot my first buck.

So, after years of passing deer up and allowing others the chance, I finally saw a deer that I just had to have for myself—he was a piebald buck we named “Medusa.” As the 2021 season neared, we checked trail cameras and noticed some substantial growth from previous years; at that point, I was ready to quit my job and sit in the tree 24/7 just to tag Medusa.

At the beginning of November, I had to let Medusa walk, within bow range, right at dark. It was legal to still shoot my crossbow, but seeing my crosshairs well enough to call it a good shot was just not an option.

A few days later, my luck changed. On Wednesday, Nov. 3, my husband and I got into the tree a little after 3:00 p.m. The weather was perfect—a cold November day with temps in the 40s. However, the wind was terrible for us; but we were itching to hunt. We both agreed that with a scent-free shower and some nose jammer we should hunt regardless. We climbed as far as our summit stands would allow and got settled in.

About an hour into the hunt, Lindy saw three does move in. While he was busy watching the does in one direction, he didn’t realize that Medusa was coming from the other.

With a soft whistle, I caught Lindy’s attention. I could see Medusa slowly making his way to me. My heart was racing, I thought it was going to beat right out of my chest! I watched him slowly take his time coming in. At this point, the three does were right below us. Two other does came in from behind our tree, and another was right under my stand. Medusa worked his way to about 40 yards from our tree while staying in the cover of the thick, brushy edge.

Lindy whispered, “When he steps out, take a shot.”

I was already on him, waiting for the time to touch off my Ravin crossbow. But he never stepped out. Instead, he turned broadside in the cover. After a few more minutes of waiting, he stepped out of the brush into an opening, but he was facing me chest-on.

Finger on the trigger and waiting for something other than a chest shot, the wind kicked up. The does below me start to act up and Medusa stomped his right leg.

Lindy whispered again, “You gotta…” But before he could get the words out, the bolt struck Medusa in the chest, producing a lethal shot and an easy tracking job.

Flooded with emotions, I tried my best to sit quietly. I prayed that we’d find him, and I continued to thank God for the blessing of the hunt. I just couldn’t believe it. After all this time and all the bucks I’ve seen and passed on, finally, there was one I wanted. And now he was mine! It felt like hitting the lottery, yet somehow I found myself calmed by the experience.