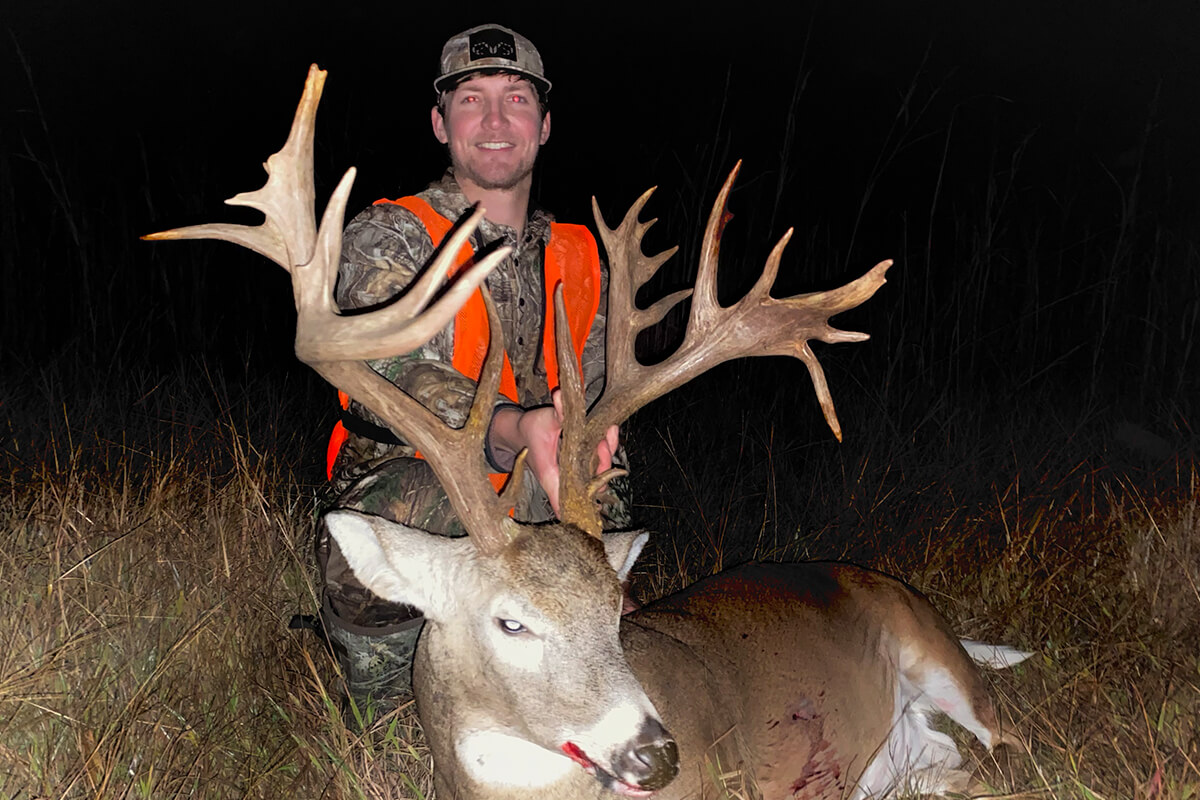 Cort Travis’s landlord for his college house owns 80 acres of cattle land in Oklahoma. Back in September, he received permission to dove hunt the property. While he was dove hunting, he had seen some deer on the property, so he asked the landlord’s permission to hang a trail camera on the parcel.

“She told me I could hang a camera there, and she was really cool about it,” Cort remembers.

The first week the camera was up, Cort received pictures of nine different bucks, including a 140-inch 8-point. About a week later, Cort and a roommate were flipping through some more trail camera photos from the property. And that’s when they saw the first picture of the giant.

“I just could not believe it,” remembers Cort. “I was very surprised, because I had never seen anything this big before.”

Cort hung a stand on the property and had consistent pictures of the deer throughout the rest of September. However, right before the Oklahoma archery season opened, the buck disappeared.

“I thought, you’ve got to be kidding me,” says Cort. “I just didn’t know what else to do.”

Cort scouted the property some more, and he placed a trail camera on the north side of the property. Eventually, he started getting pictures of the buck again. However, they were always at nighttime and very sporadic. During October, Cort also met the person who owns the property to the north and south of the land he has permission to hunt.

“He was very cool about me also hunting the buck,” says Cort. “He told me he was also getting pictures of the buck on his property.”

Oklahoma’s muzzleloader season opened on Oct. 23, and Cort says that is when the buck began showing up on his trail cameras more consistently. Although Cort hunted the buck hard that whole week, he never had an encounter. Then, Oct. 29 arrived.

Cort climbed into his tree stand that afternoon, and he never saw a deer until late evening. Then he caught some movement in the distance.

“I looked over, and all I could see were tines everywhere,” says Cort. “I thought, oh my gosh, it’s him.”

The buck disappeared into the brush, and Cort texted his dad to tell him about the encounter. A few minutes later, a doe stepped out to the east of Cort’s tree stand. However, the wind was blowing from the west, carrying Cort’s scent to the doe.

“She stood there for five minutes,” says Cort. “She stomped a few times and had her nose up in the air. I knew if she blew the buck wouldn’t come in.”

The doe never blew, and several minutes later the non-typical stepped out in the same place the doe did. Cort was hunting a field of short grass, but on its perimeter there was a section of nearly five-foot-tall grass. That’s where the buck was standing, and all Cort could see were the buck’s antlers.

“He walked into a gap in the grass, and he hesitated, allowing me to see everything on him,” remembers Cort. “I thought, now or never.”

Cort shot and heard the projectile hit the buck hard. However, because of the tall grass and the muzzleloader’s smoke, he never saw where the buck went. Cort called his dad, who was on a dinner date with Cort’s mom, and his dad left the date to help Cort look for blood. Cort climbed down from his stand 40 minutes after shooting, and he found great blood for about 15 yards. Then it just stopped.

“At that point, I was not feeling good about it,” says Cort.

Cort called his dad to let him know he was going to backout, but while he was on the phone, he looked to his side and saw the buck lying dead 10 yards away.

“My dad and a friend came out to help me with the recovery,” says Cort. “And then we took the deer to show the neighbor who also was hunting him.”

“The neighbor was really happy for me,” says Cort. “I can’t tell the story without thanking him for that.”

Cort’s father green gross-scored the non-typical at 213 inches. And Cort is grateful for an opportunity to kill such a big deer.

“I feel extremely lucky,” says Cort. “I hunted him hard, but I was in the right place at the right time.”