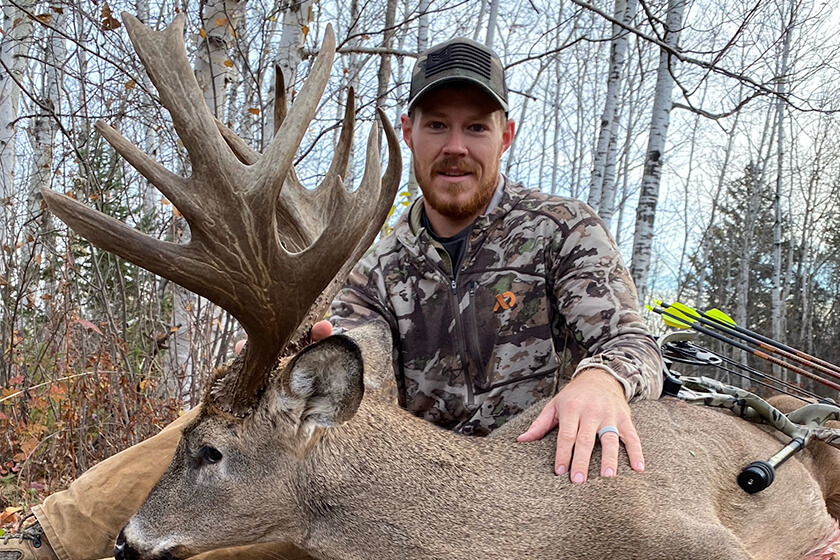 Late last winter, Daniel Esselstrom scouted a new spot on public land in Wisconsin. The spot looked promising, but Daniel never put any trail cameras in the area until mid-summer. After the camera had been out for about a month, Daniel checked it and was surprised to see a giant whitetail with palmated antlers in the area.

“I couldn’t believe it,” says Daniel. “In northern Wisconsin, this isn’t normal. I was completely blown away by the antlers.”

Daniel pulled most of his trail cameras from other areas and went all-in on scouting for the unique buck. The tactic paid off, and Daniel had the deer on camera regularly through early September. However, right before the mid-September archery opener in Wisconsin, the buck vanished.

“I started moving cameras and scouting like crazy just to find him again,” remembers Daniel. “It took almost a month, but I finally got a picture of him on Oct. 23.”

On Oct. 23, the same day as he received the buck’s picture, Daniel made his move into the area to hunt the buck. However, he bumped the buck from its bed just 100 yards from where he planned to hunt the deer.

“I walked right in on top of where he was bedded,” says Daniel. “I busted him out of there.”

After bumping the buck, Daniel waited a few more days before going after the deer again. He had a few unsuccessful sits, but his opportunity came on Nov. 1.

On Nov. 1, Daniel hunted the public land in the morning and passed on a great 9-point. That afternoon, Daniel went back in and hung his Lone Wolf tree stand for the evening hunt. As he watched some does and a young buck, the young buck pinned its ears back and marched off. Daniel thought the young buck was going to fight another younger deer, but he was wrong.

“Then the big buck stepped out,” says Daniel. “He chased off the younger deer before making a rub and moving closer to me.”

The palmated-antlered buck came into 22 yards, and Daniel shot the deer; but his arrow hit the buck’s spine. However, one quick follow-up shot finished the buck off quickly.

“He’s pretty unique,” says Daniel. “It’s not something that anyone I’ve ever talked to up here has seen before.”