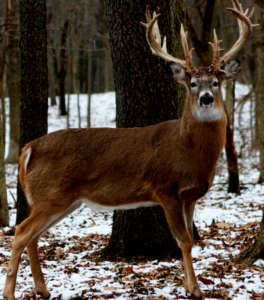 Hunting has been a primary survival technique not just for carnivorous animals but also for human beings. In fact, nowadays the only time we come across the word ‘deer’ is when reading about its death or something similar. Successful deer hunting escapades stories survive generations of hunters who derive their motivation from their successful catches. Have you however thought about those incredible deer that have been found dead to their fate and not the hunters? Compiled below is a list of few of the biggest whitetail deer and you may probably have read about some of them from different magazines.

Named as one of the highest scores ever attained by a free-range buck it never succumbed to the bullet or arrow from a hunter. It has topped the list from 1981 when it was found dead from natural causes and has the highest score of 333 7/8. It is currently the top of the list and from the looks of it — it is going to be at the top of world’s biggest whitetail deer list for a very long time.

The Hole in the Horn Deer

Some time ago, railway employees stumbled upon a dead deer which has established its reputation as the greatest of the great. It is unique in appearance and not just because of its massive size but unique horns. It sources its name from the small bullet-like hole located just around its right side antler. It has been agreed that the deer is among the largest of its kind and to find such a whitetail dead to its own fate has surely disturbed the mind of many scorer hunters from the 1940s to date. It was even hung for about 40 years at a local club in Kent, Canada before officially enrolling on the official scorer list in 1983. Its score is the highest translating to 328 2/8

Have you ever traveled Midwest, Illinois and seen the number of deer in the places especially at night? The number of deer deaths is, in fact, steady high from the car accidents in this region involving deer. This particular deer was never able to make across the road but again it was no normal accident. The founders that found the body in 1965 remained amazed at the enormous size even as they confirmed its weight to about 400 pounds! Legendary whitetails have in fact placed on their displays and go into history as its score translates to a net score of 176 5/8.

It was disappointing when about four hunters including Adam Jordison hunted a deer and failed only to lose it to blue tongue, a common white buck disease. This was, however, no ordinary buck because its size would give it a clean rating of 272 3/8, a great pioneer in the white buck family. Adam after giving up one day found the carcass of this great creation at his backyard his only regret not being the killer. It gets its name from its size and the shocking news that broke the hearts of both the locals and hunters too.

This is a mystery buck whose death earned it a place on this legendary whitetail bucks list. Not much is known of this breed of buck but if it made the list then it must be worth something right? Founded in Kansas back in 1999, the buck sourced its name from the event making it the Kansas mystery 99. With no clear story surrounding its discovery, it is told that the buck was not found dead unlike most names on this list. It, however, made a very good score of 199 2/8.