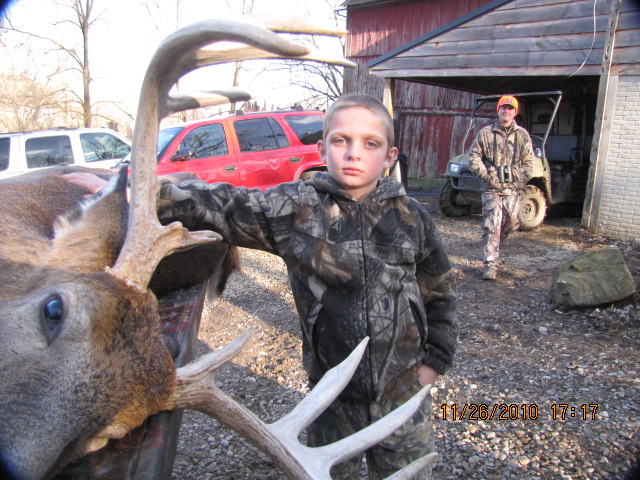 Deer hunting dates back thousands of years, and Ohio is on the bucket list of many hunters in the US. The Buckeye State is home to thousands of white-tailed deer that hunters can shoot if they play by the rules.

In this article, we’ll cover the dos and don’ts of Ohio deer hunting, including season dates, the state’s regulations, and weapons you can use to hunt.

Why is Ohio a top deer hunting location in the US?

Every year, Ohio attracts about 400,000 hunters around the US. The state is a leading hunting destination in the Midwest primarily because of its conducive habitat and fertile soil for deer.

Ohio has lands where soybeans and corn grow. These crops provide deer with the nutrients they need to feed and survive.

Ohio also offers a decent environment for deer to live. It is populated with Oak-hickory forests, which allows these hunting animals to roam. Luckily, the state’s terrain doesn’t pose a threat to deer. In areas where the terrain is significant, the agriculture recedes to the forest.

Lastly, Ohio is a destination hunting state because of its strict rules on deer shooting.

Thanks to its reputation as a hunting destination, Ohio has one of the longest seasons in the US. Here are the dates for the 2020-2021 deer hunting season in Ohio:

Archers got first seed in Ohio deer hunting this time. The bow season started on September 27 and will run to February 3. During the 2019-2020 hunting season, 184,465 deer were checked in by all hunters. Archers alone accounted for 48% of deer hunted during the season.

This stat implies that archers have surpassed gun hunters in the number of deer taken for the seventh year in a row.

This period will run for only two days: November 17 and November 18. As the name implies, this season is for young hunters. They can use legal guns, muzzleloaders, or cartridge rifles to check in deer.

In Ohio, kids 17 years and younger need to be accompanied by an adult when hunting. These children also need a hunting license to shoot down deer in the state.

This season will first run from November 26 to December 2. After a break of about two weeks, it will run for two days: December 15 and December 16.

According to the Ohio Department of Natural Resources (ODNR), 63,493 deer were taken during the gun season. This implies a 4% increase from the 2018-2019 hunting season, where the numbers sat at a little above 60,000 deer.

Muzzleloader hunters will have their shot about three weeks after the gun season ends. It will run from January 5 to January 8.

In the 2019-2020 season, hunters took 14,168 deer during this season. According to Kendra Wecker, the Division of Wildlife Chief, ‘Hunting with a muzzleloader is a true American experience.’

Irrespective of the season, Ohio’s bag limit states that you can only hunt six deer. However, this number could be less in some counties. For example, in the 2016-2017 hunting season, hunters could take in up to four deer in Cuyahoga and five other counties.

Furthermore, the Buckeye state allows you to check-in only one antlered deer yearly. This way, these deer can live long enough to be considered trophies.

US state set their bag limit based on how quickly they can stack up wildlife again.

What weapons can you use to hunt deer in Ohio?

The hunting season descriptions give an overview of weapons that are allowed. However, Ohio is one US state with strict rules on what you can use to hunt deer.

In 1976, Ohio legalized crossbows for hunting. However, your preferred crossbow must weigh at least 75 pounds for you to be able to use it in the archery season. It should also have a 40-pound draw weight.

Crossbow-wielding hunters have checked in some of the biggest bucks in Ohio. For example, Jonathan Schmucker took in ‘The Amish Buck’ in 2006 with his crossbow.

Ohio’s weaponry rules state that you must use at least a 0.38 caliber muzzleloader to take in a deer or buck in the state. Also, only 10-gauge muzzleloading shotguns or smaller guns can be used for Ohio deer hunting.

A few years back, hunters could only use a 10-gauge shotgun to hunt deer in Ohio. However, you can now use straight-wall pistol-oriented cartridges for hunting during the gun and youth gun seasons. These cartridges need to be between 0.357 and 0.50 in size.

Ohio is particular about the number of rounds you have in your muzzleloader or firearm. For hunting deer, you are only allowed to use three rounds in your chamber and magazine. So, ensure you have a clean shot before you pull the trigger.

Who can deer-hunt in Ohio?

Ohio deer hunting is open to hunters from across the country. However, you will need a license to be able to check-in deer during the hunting season.

In Ohio (as in other states), there are two options to getting a hunting license:

Hunting licenses cost different fees in US states. The state of Ohio charges $19 for adult hunters and $10 for youth hunters for a permit. There’s also a cheap senior license for $10 and a free Ohioran senior license. These charges aren’t for tourist licenses that don’t allow you to check-in deer.

Next, you’ll need a deer permit after getting a general hunting license. The permit for an either-sex deer costs $24 or $12, depending on whether you are an adult or a youth. However, for $41, you could also get a permit for both an adult and a youth.

Luckily, Ohio places a fixed antlerless permit that costs $15 for residents and non-residents.

Chronic Wasting Disease (CWD) is a prion disease. Although no study shows that it can affect you, CWD is fatal to animals. As such, Ohio has strict carcass management and disposal rules for hunters that come to the state during the hunting season.

At the moment, there’s no cure for CWD, and the disease is transmissible to animals from an infected deer. Several US states can confiscate a checked-in deer to prevent the spread of this neurological disorder to other animals. More alarmingly, you could be issued a ticket for violating CWD regulations if you’re found with a CWD-infested deer.

According to the Center for Disease Control and Prevention (CDC), checking, testing, and preparing your hunted deer is a viable way to combat CWD. In preparing your deer, ensure you:

Ohio is a Disease Surveillance Area (DSA). Therefore, hunters would be subjected to deer checks, especially after making a kill.

The fact that it is legal to hunt in Ohio doesn’t mean you can go to any county and shoot down deer anytime. Some areas are off-limits, and others are open to the public. Therefore, if you’re going to get a chance to shoot a true trophy, you’ll need to know where the best bucks can be found.

For example, small counties have produced some of Ohio’s biggest bucks, like The Hole in the Horn buck. This beast was the second-largest white-tailed deer to have been found by the Boone and Crockett Club. Interestingly, it was only discovered along a railroad in Portage County, Kent, in the 40s. In 1986, it was measured by judges and then given a slot in the sand of time.

Southern and Western Ohio seems to be populated with the largest bucks in the state. For example, Michael Beatty once held the title of having checked in the largest non-typical whitetail with a bow in Green County. It was a 294 0/8 inches buck.

Several other success stories have come from hunting in this area. For example, Jerman shot a 201 1/8-inch buck in Warren County, which is in Southern Ohio.

Furthermore, Southern Ohio has become a fantastic hunting ground, having spent a decent amount of time as mining lands. So, Gallia County and Athens County could be exciting places to test out your shotgun or muzzleloader. If you really search, you might even find more areas like the Conesville Coal Lands where hunting doesn’t require several permits.

Sometimes, experience plays a huge part in determining where to go to get the best deer. In Ohio, several outfitters can help make deer-hunting worth your time and money. Although you can easily find almost every outfitter on Google, their services aren’t similar.

Here are the essential things to do when picking an outfitter for Ohio deer hunting:

Always scrutinize the images you find on an outfitter’s webpage. Some businesses are notorious for putting up fake pictures or displaying several photos of the same deer in their collection. Others have cool photoshopping skills. Don’t fall for these tricks.

Also, always approach outfitters’ pictures as a skeptic. No outfitter has guides that can lead hunters to ten thousand bucks in one hunting season. Ensure you do your homework and check-up references.

In Ohio, hunting guides need a license to practice. Any guide that can’t show you a license is probably not legit, and there’s no need to spend a fortune on such hunting trips.

Like any other business, an outfitter’s ability to survive for many years is a quality that not many have. If you intend to hunt with a new whitetail outfitter, ensure everything checks out.

Unless you have the best outfitter that can help you get the job done in hours, Ohio deer hunting could take some days. Sleeping in a truck might not be the best idea. So, consider the lodging conditions when picking an outfitter for deer hunting.

Furthermore, some outfitters let their guides hunt in the same area as you. This could cause a conflict of interest as your guide could take home your deer.

As stated earlier, all 88 Ohio counties are open to sportsmen and women to hunt white-tailed deer. However, illegally checking in a deer is a third-degree misdemeanor in the state. You can get up to 60 days in jail time or by requested to pay a fine of up to $500.

Asides from these rulings, Ohio could also take up restitution for poached deer. The minimum restitution is $400. However, this could increase for any deer that has a score north of 125. Trophy bucks could attract restitution of $20,000 or more.

For example, picture two large 300 6/8 deer with a gross score of 150 that have just been illegally taken in. Its poacher will have to pay $500 for the misdemeanor and $4,125 for each deer as restitution.

According to the President of Ohio’s sportsmen League, Larry Mitchell, ‘Poachers steal from Ohioans and prevent hunters from having a game to hunt.’

Ohio is a go-to state for white-tailed deer. The Midwest state has such strict rules that experts believe it will retain its hunting reputation for many years to come.

Whether you’re hunting as a new hobby or for trophies, Ohio deer hunting is an activity you won’t forget in a hurry. The hunting season is on.

Why not find your legal weapons and give deer hunting a try?