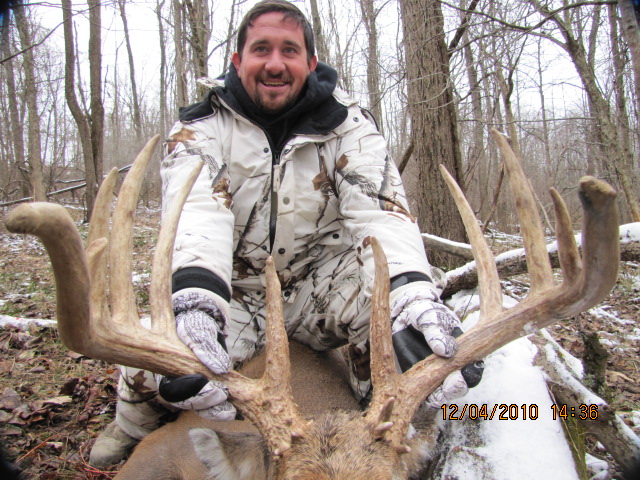 Fall is one of the best times of the year. For hunters, it ushers in the deer hunting season in Ohio, where anyone who plays fair and square can take in trophies.

Deer season dates are tweaked yearly, and the 2020-2021 timeframe has long been approved.

In this article, we’ll uncover Ohio’s deer hunting dates for 2020-2021. If you stick around, we’ll also reveal everything you need to know about Ohio deer hunting and its regulations.

The deer hunting period is divided into four seasons:

The deer archery season held a stiff competition with the deer gun season in terms of deer taken in previous years.

As in previous years, the hunting hours in any season are fixed. In Ohio, you can hunt 30 minutes before the sun rises and 30 minutes after it sets.

How are deer season dates chosen?

The Division of Wildlife biologists proposes deer hunting season dates in Ohio. Thereafter, these dates are presented to Ohio’s Wildlife Council for scrutiny and approval. The final process usually takes a few weeks.

On February 19, the proposal for the deer hunting season in Ohio was tabled. According to the Ohio Department of Natural Resources Division of Wildlife, the Wildlife Council approved this proposal on Wednesday, May 13, 2020.

Hunters from around the US can hunt deer in all 88 counties of Ohio. However, the Buckeye state allows hunters to only check in six deer throughout the hunting season. This is known as the six-bag limit.

Out of the six that you can take in, only one may be antlered (have antlers greater than 3 inches).

Here’s a breakdown of counties and their bag limits for the 2020-2021 seasons.

According to the Ohio Department of Natural Resources, these changes are to deter wildlife depletion.

1% of hunters kill six deer in a hunting year. To get to this number, they usually have to county jump.

The Buckeye State is home to thousands of deer, thanks to its conducive habitat. However, the deer hunting season in Ohio still exists primarily because of its strict laws that prevent poaching and illegal checking in hunting animals.

Here are the rules that hunters have to follow during, before, and after checking-in deer in Ohio:

These are laws set aside for hunters who make a kill during any of the hunting seasons. It states that:

Hunters must complete game tagging and checking-in before noon of the day after a kill. However, you’ll have to tag and check-in your deer at 11:30 pm if you kill a deer on the last day of any season.

Deer hunting in Ohio requires a license. This license is for the entire hunting year, and it can either be bought online or from a registered business.

Generally, there are two types of permits you can get when deer hunting in Ohio:

(i) Either-sex deer permit: This document allows you to hunt antlered or antlerless deer in Ohio. You can use it during any of the hunting seasons. However, you can’t roll it over to another deer hunting season in Ohio.

Either-sex deer permit comes in different forms, which include:

While some are free (like the disabled veteran either-sex deer permit), others require a purchase fee.

(ii) Antlerless deer permit: This type of permit is only valid in some counties in Ohio. As the name implies, it allows you to check-in a specific number of antlerless deer during a stated hunting season.

The Doe permit (as it is often called) allows you to take:

However, you can’t take an antlerless deer after December 6 from any administered lands or state-owned property.

You also don’t need an either-sex permit to get an antlerless permit in Ohio.

Chronic wasting disease (CWD) is one of the top diseases that kill deer in the US. It is a transmissible prion illness popularly known as the zombie deer disease. According to the Center for Disease Control (CDC), CWD’s infects more than 10 percent of deer in the country.

Different states have set up strategies to reduce the risk of CWD’s spread to other deer. In Ohio, hunters are only allowed to:

What you can do:

You can’t use shotguns that have shoulders when hunting deer.

What you can’t do:

When it comes to deer hunting in Ohio, every year is different from the previous one. Asides from the bag limits set by counties, some other changes have been made:

Lake La Su An Wildlife Area is in Williams County. Up until the 2020-2021 season, hunters couldn’t hunt bucks there. However, the ban has been lifted, and you can now take in antlerless deer in the wildlife area.

During the firearm season that runs from November 30 to December 6, you can hunt small game. Hunters (except waterfowl hunters) will have to don a blaze orange clothing during this week-long season.

This permit can only be granted by the chief of Ohio’s Wildlife division.

Every year, hunters across the US always look forward to the deer hunting season in Ohio. The Buckeye State’s season dates have been approved, and hunters are set to break records.

If you’re a hunter looking to kill deer as a hobby or to get a trophy, you’ll need to keep Ohio’s season dates that we’ve included in mind.

No rule says you can’t hunt in more than one season if you have the required permits and a license.