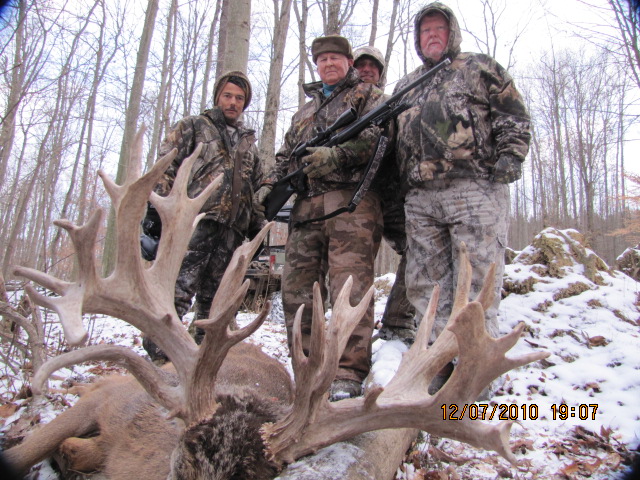 This article is a complete guide on how to hunt Ohio whitetail deer. If you want to learn all the specifics in deer hunting in Ohio, you must read this guide!

Today, Ohio is recognized as one of the best states for hunting whitetail deer. But, this wasn’t always the case.

For the longest time, the state didn’t have many serious outfitters who would provide guided hunts. One of the main reasons why they’re experiencing such a quick change is because of a deer management program.

According to this program, you can only harvest one deer while being able to hunt multiple does. As a result, there is a much better spread of bucks to does.

Also, Ohio has an amazing habitat for whitetail deer, making your trip that much better. If you want to know how to hunt Ohio whitetail deer, here are some of the things you need to know!

Like with any other type of hunt, it is very important to learn more about regulations before you give it a go.

As already mentioned, it is very important that Ohio has made legislation according to which you cannot harvest more than 1 set of antlers each year. This gives bucks an opportunity to grow and become even better trophies.

In other states, hunters are prepared to shoot every buck they come across. Ohio hunters have to be very selective when choosing their kill. In other words, they will pass on numerous opportunities until they find the right buck.

Another interesting tidbit is that Ohio has the longest deer hunting season of all American states.

This means that it will never get crowded, but if you’re proficient in different weapons, you will be able to hunt throughout the year.

If you want to hunt Ohio whitetail deer, you will be glad to hear that the state allows hunters to purchase their tags. By having a non-resident tag, you won’t have to worry about the timetable as you will have more than enough time to plan and execute your hunt without feeling rushed. It is another thing that makes the whole experience that much better.

According to data, there are around 750,000 whitetails in this state. Each year, Ohio sells approximately 400,000 hunting permits, and what is even better, they are much cheaper compared to hunting permits in some other states.

There are some really big whitetails in Ohio. Based on the data so far, there are about 600 typical entries and almost 400 non-typical ones. The largest typical entry is measured at 201 1/8”. Based on that, this is the 11th largest of all time.

If you wish to have the best possible experience, we suggest that you hire a reputable Ohio whitetail outfitter who can provide long-lasting memories. Your ability to hunt a prime deer is directly connected with your guide and his ability to lead you to it.

Needless to say, Ohio whitetail outfitters are some of the best in the country.

One of the reasons why whitetails are so big in Ohio is because of its amazing flora and fauna. They have access to amazing habitat, allowing them to reach their peak size.

A lot of Ohio consists of agricultural land; corn and soybeans are spread throughout the state. Because of that, as well as other plants, whitetails have access to prime nutrients, which is why they tend to be so large.

Besides this kind of land, there are a lot of hickory and oak forests. They also bear a lot of different things that are important for the whitetails diet.

Ohio has a lot of free, uninhabited space where deer can roam free, and where hunters can enjoy various activities without being interrupted. Given that there are ample trees, it also means that the hunt will be much harder for those who are seeking a challenge.

Unlike some open space or regions with a poor tree density, Ohio woods are very dense, which makes it harder to take down a whitetail. Although this isn’t something that every hunter can appreciate, a lot of seasoned veterans will love this type of layout.

Although Ohio deer habitat is great as it is, the state is doing its best to further improve it. There are also continuous efforts by the landowners, outfitters, and even hunters, who want to make these hunting grounds even better.

One of the biggest emphasis is on deer management. Things such as harvest control allow deer to have food for longer periods of time.

Keep in mind that a large part of Ohio is in the hands of private owners. Because of that, it is much more common for hunters to choose an Ohio whitetail outfitter.

What do I need to know about Ohio whitetail outfitters?

If you want to have the best possible hunting experience, we suggest that you go with a local outfitter.

As already mentioned, the majority of the land is in the hands of private owners. Because of that, you need to go through them if you wish to hunt on their land.

A lot of big proprietors are willing to give access; some of them are even working as outfitters. Going with a reputable outfitter, who has access to large plots of land, is perhaps the best way of getting that big, juicy trophy.

Finding the right deer outfitter can be an arduous task. There are a lot of providers making it really hard to choose the right one. This is especially true for people who have limited experience with whitetails and hunting in general.

Here are six useful tips that will help you find the right one: